I know I just posted, but this was too much not to share!  OK, so we have the meat and are waiting for Lorene and Joel to come pick it up.  We take a trip to town, and as usual, take as many errands as possible in one go to prevent future trips.  We couldn’t get the groceries, so we’ll have to go again today-sigh, because they were here waiting for us with the gate locked.  They get their meat and drive into the pasture to pick up Butty.  He’s not halter trained and laid down immediately when we started to pull him.  The halter’s a calf halter and stiff rope and I’m afraid will cut into his skin if I pull too hard, so dragging is out of the question.

Pull, wait, pull, wait…he gets up eventually.  At this point, Fargo-the bull-realizes what is going on as the trailer is opened and Butty is being halter-drug.  He is NOT happy as he has begun a friendship with Butty of late.  He starts running around bucking and mooing and throwing a fit and quite frankly, beginning to concern me.  I make Marcus stay in the hay (it’s contained with coral panels) and NOT come out.  Betsy and Booger begin to throw fits as well.  Now, this picture doesn’t do it justice, I need a more recent one, as their horns have grown even more, and Fargo is a bit older and more…comfortable around us. 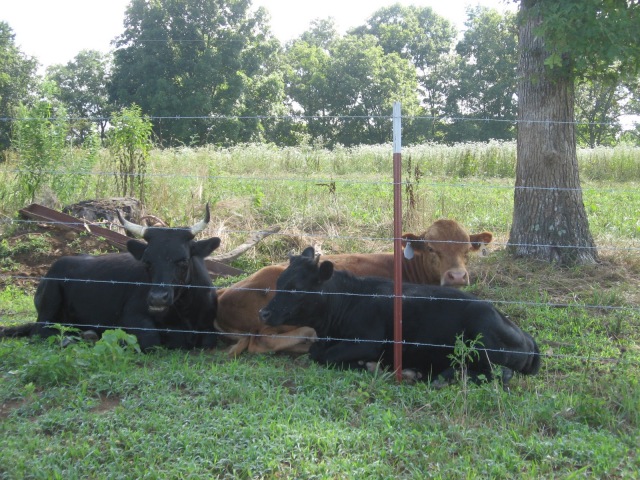 Now, I know they’re laying down, but you’re out at night and they are MAD.  Don’t tell me that isn’t intimidating.  Oh no, I’m in the middle pulling Butty from the barn to the trailer, Fargo’s acting up and eventually squares me off blocking me from the trailer.  Lorene just walks up to him, “Shoo, go on now, shoo!”  Even Arlis told her to stop.  Now Arlis was afraid of cows in the beginning, he’s really come a long way.  It was mainly the horns, but he’s realized they can be helpful when grabbed and used to direct the cow.  But they shoo Fargo who is circling me like cannibals at the cooking pot and finally stops behind me.  So here comes Lorene.. “No! No!, Now you stop that!”  She has her finger up, her hand on her hip, and everything!!

Don’t get me wrong, I think highly of her for this, but one does wonder where her bravery comes from.  It certainly made me feel the coward.  We finally got him in.  Joel lifting his rump and me pulling his front, and Butty purposefully falling all the time, “I will NOT!  I WON’T I WON’T I WON’T!”  Betsy bullies Baby now, Fargo is displeased, and Booger is the obedient child that stands around and says nothing.  Baby will eventually get much taller than they are, and hopefully be able to stand up to them.  In the meantime, we guard her every morning and evening as she gets the grain and the others stand around waiting for us to turn our backs.  When Baby’s had enough, Arlis lets Betsy get what’s left as she is pregnant and STILL NURSING BOOGER!!!  We have yet to figure that out.

Our beef adventure turned into a learning experience.  Firstly, the steer was advertised as 900-950 lbs.  They got there and were told 900 lbs.  The slaughter house weighed him in at 710 lbs.  So, we lost 200 lbs there.  We were also expecting 50%, then 40% of live weight to be actual meat.  The slaughter house told us that those percentages are too high and are probably hanging weight (no skin, head, feet, or innards, but still with bone).  Actual percentages are 32-37%.  We weighed our half only and came to 33% plus bones for the dog.  She just finished one.  I hope it wasn’t actual bone because she actually consumed it.  Well, if she buries her poop later we’ll know there was a bone in it.  We got the following:

We added it up, calling the local store for prices, and found that including $5 for the bones, we saved an amazing $16!!  Not quite our goal.  Now, this actually means losing money b/c we would never buy these expensive cuts of meat.  But, Mya has really cool dog treats, and we have hormone free, cruel free, healthy meat to eat.  The ground beef is in little 1 lb packages which is REALLY convenient.  We have every bit of freezer space occupied as we are holding my in-laws’ half until this evening as well.  Seriously, you couldn’t fit a piece of fly poop in the freezer!  The chest freezer is 22.3 cubic feet.  We had to rearrange the house freezer and put a bag in it.  Total pounds for our half?  Almost 120!  Total price? $3.14/lb.

Oh, and any recipes for expensive cuts of beef are very much appreciated.  We have lived off of ground beef for so long, I have no idea how to cook steak, roast, ribs, etc.  I can guess, but I would hate to ruin something that nice.  Also, someone gave us a meat slicer for deli meat thin slices.  If anyone can tell me how to cook a roast in order to slice it up for sandwiches, I would be very much appreciative.  I’ve crockpotted roasts on sale and made BBQ, but that’s as far as my culinary skills go with unground meat.

THX for recipes in advance!!

We bought a 710 pound steer for meat.  His name was Presley.  He went to the slaughter house last week.  We should get him (the meat) this week.  We’re halving it with relatives.  It hangs for a while.  They said the norm is 7-10 days.  I just wanted meat.  I’m not sure I want it hanging.  I had a HORRIBLE sinus infection.  Here’s my “loving” husband making me go outside sick as a dog and convince a 700# steer to get in a trailer.  He does NOT want to cooperate.  Hated to kill him as he was real gentle and loving.  But, he’s a steer, so there is no breeding him in order to produce better livestock.  Then I had to practice backing up with a trailer.  Thought I had it down, but the loading area was skinny, and I wound up having to have this poor man do it for us.  It took three of us to get Presley out of the trailer after that.  I wanted to tan the hide, but was really too sick to spend all day outside up to my elbows in cow brains.  I’ll let you know how the cook out goes!  Butty (the baby steer) will go away with his owners when they come to pick up their share of the meat.

We’re having to hay every day and bump up the grain ration for the calves now.  They’ll stop grain in a few months.  After the cold.  We’re planning on building a bit of wind breakage on the barn.  Some will be removable for the summer months.  The water freezes over night, but so far thaws out for most of the day.  I’m not sure what our solution will be in the really cold months.

We’re building a fence on the lower field for hay and to rotate cattle.  We hope to have three calves a year and will need the extra space/hay.  We estimate 11 round bales a winter.  That’s a LOT of hay (cows eat 1-5% of their body weight in hay daily depending on the breed/weather)  That’s about one every two weeks.  We’ve thought about a feeder, but are sticking with the trough (manger) for now.

We weeded the strawberries and found rabbit tobacco.  I’ve looked at a dozen or more sources and found it is great in a tea as an expectorant, smoked for asthma, and exhaled through the nose for sinuses.  It contains no nicotine and is not addictive.  I have some drying and a small bit already dried.  I have a cold/sinus infection and will let you know how the tea works.

I got tired of Marcus’s reading program.  It’s the one used by the public school system, and it is awful!  Truly, truly AWFUL!!  It is Houghton Mifflin Reading.  I liked the grammar I was using so much that I switched to its author’s program.  They don’t have reading, they have writing.  It’s very similar and combines memory work (dictation) with handwriting (copy work) with summarization and listening skills.  His attention span is currently awful, but he is trying and getting better at learning to listen.  His memory (dictation) has improved a great deal.  We just started week 5.  It’s called Writing With Ease.

I bought the student workbook.  I’m starting to think I should have bought only the teacher edition.  I’m not sure why I chose this over the other.  You only need one though.  The workbook pages are just lined writing paper.  Pretty pointless.  We’re just using regular paper and selling it afterwards.

We also bought The History of the World level one.  I wanted to start from the beginning as level two starts where level one leaves off.  He loves it!  He asks to do history every day.  We do, and will perhaps start level two before the year is over.  It is a very good book.  Warning!!  There are inaccuracies in the book and it mentions pagan religions and several lessons are nothing more than reading pagan god stories like the story of Ra or something.  It may be favored by the religious parents, but you must read ahead, have a Bible handy, and be ready to explain things.  It works well for us and for many others.  Especially since there isn’t a history book out there for this age to begin with.