My Take on Firewatch 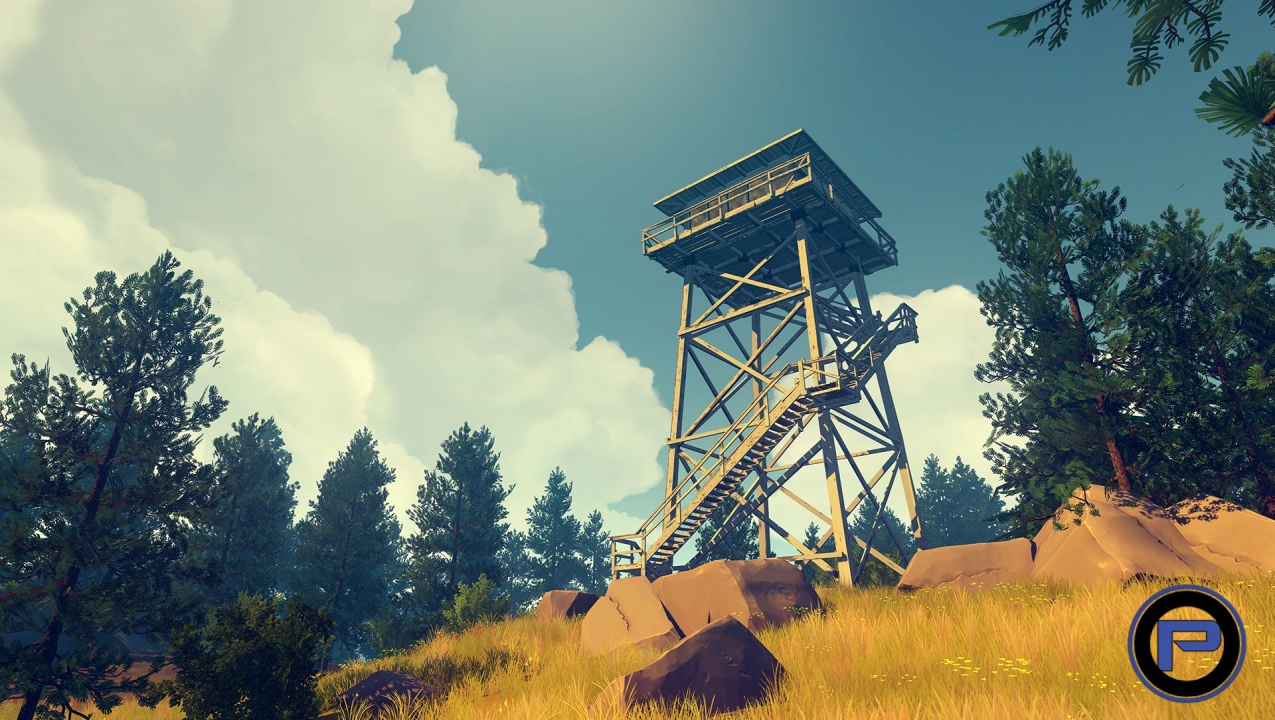 I was first intrigued by the concept of a game based around a forestry service position, seeing as how I know several rangers personally, and even have a friend that lives by a park, and yes, has performed control burns every year, etc. The graphics were beautiful. 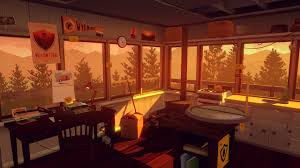 (the inside of your station, which you do nothing, I repeat nothing, in)

(the outside of your station, which although your female counterpart never leaves hers, you are forced to leave yours on a constant basis, mainly just to do her biding)

The thought of tracking fires was enticing. The storyline? Not so much. But several sources said that you don’t have to talk to the woman and can just play the game. Unfortunately, that’s not exactly true.

It comes across as a universal free-for-all as far as wondering around goes, but it isn’t. It’s very linear. Normally I don’t mind linear games, but this one was linear to the point of annoying, much like the way I just used the word linear so many times that it annoyed you. But I digress.

First of all, you do have to follow the story, or at least be subject to its ridiculousness. Two jerks get married. One of them gets early Alzheimers, and the husband runs off, only to meet another jerk while watching fires. There wasn’t a single redeeming character in this so-called plotline.

These characters are an insult to forestry personnel everywhere. They’re drunk on the job, potentially having sexual liaisons with each other (I didn’t go that route, but it certainly sounded as though the characters did or at least wanted to.), and, get this, are completely horrible at their job, when they actually do attempt to perform at it.

These characters are imbeciles. I know the new fad is to use the f-word non-stop, but it’s stupid. Here’s a bit of dialogue.

“Oh for eff’s sake! I wish I had an effing machete that actually effing worked!”

OK, you just told me “Oh for sex’s sake! I wish I had a machete I was able to have intercourse with that actually sexually worked!” Um…you do realize that you sound like a complete idiot, right?

If you’re going to cuss, at least use the words in the way they were intended, not some impossible throw around. Every character in the entire story had the exact same personality. They like to get drunk, use a lot of salty language, and talk about marital relations, only not with their spouse. They speak harshly to each other and about others, and there’s not a caring bone in their body (which made D’s “crying” over Brian absurd). In other words, they’re all jerks.

Now for the plotline. OK, there were a few interesting points, I repeat, a few. But these points were never fully explored or explained, short of some boy that I didn’t care the least bit about. I muted the talking parts of the game and only read the subtitles when I thought that I had to. I hated the characters.

Why did I finish it then? Good question. I continued to play the game for three reasons: OCD – I have to finish what I start, or at least some of what I start 😉 ; like I said, I have forestry service friends and enjoyed that aspect; and I kept hoping I could search around and find something. It’s not worth it folks. Even people who sing its praises complain about the abrupt and empty ending.

All in all, this is a highly offensive game with nudity, bad language, pathetic characters, annoying gameplay (he can climb a 10 foot cliff and pick up a 8″ cinder block with one hand but can’t step over a log?!), and an unfinished plotline. Oh, and it shines a terrible light on the forest industry (my apologies on their behalf to Deannia, Ember, and others). It needs to be burned.

How was your Valentine’s Day?

Let’s talk about Valentine’s Day. A recent Writer’s Circle that I have joined asked us to write about a memorable holiday. Valentine’s isn’t a holiday for us, but why not, it was memorable.

It started out with the fact that I finally convinced my husband to join me in trying to get back into shape. This alone is miraculous. But after 1 month of dieting and exercising, my husband losing an inch and a half, and me losing none, my husband did the unexpected (I suspect he’s really trying to get me to give up so he can), he bought me a box of chocolates.

Now to most people, this is not unexpected, but as you should well know by now, Arlis is legally blind, and save the one time he ran over the apple tree with the tractor, he hasn’t driven a day in his life. Be thankful for that. So to find out that he had bought me a box of chocolates without my knowledge was pretty fantastic.

There was just one problem. My dad had taken the chocolate and locked it up in a cabinet in the shed. This served two purposes. One, I can sniff out chocolate better than a dog can cocaine. Secondly, it kept him from giving it to me early (he’s real bad about that). I know you’re thinking, “What’s the problem? Isn’t that what you wanted?”

Dad took off for Knoxville, only to stay about 6 days longer than he planned.

I wanted my chocolate.

Now, I had already made allowances for going on our traditional day-after-Valentine’s-Day-haul. So, although I shouldn’t partake of both what he bought me and the traditional haul, I planned to. I may be dieting, but I’m not stupid.

This year’s haul: (don’t worry, it’s for the whole household. If I ate that much, it wouldn’t be pretty.) 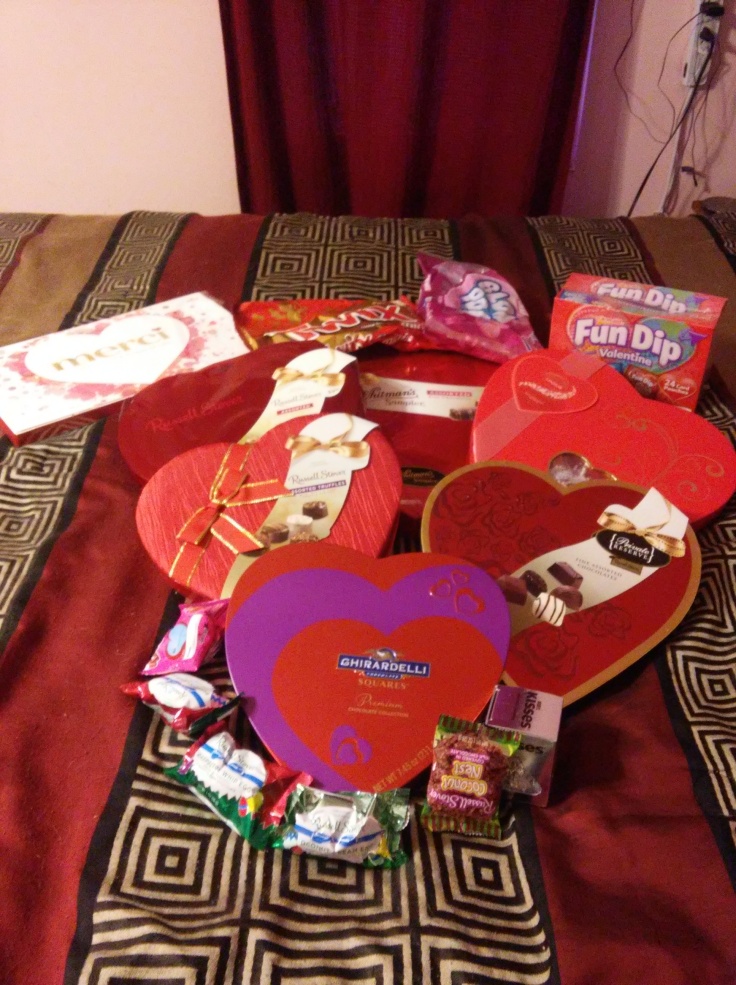 Back to my dilemma.

What’s a girl to do? By now you should realize that I am nothing if not resourceful, so I broke out my trusty lock-picking set. 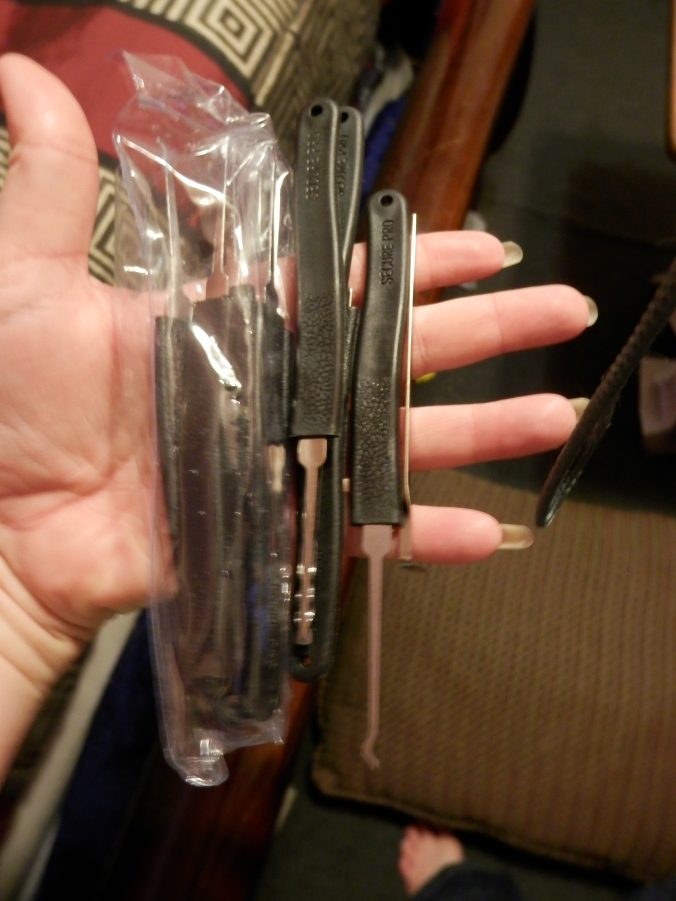 (It even came with this really cool see-through practice lock)

If you want one on Amazon, you can purchase it here:

It doesn’t come with the pouch and all of that. It is pretty chintzy, but it gets the job done. I’m not exactly a professional lock picker after all.

Anywho, I figure me versus this 40 year old cabinet is a no brainer. (actually I didn’t. I assumed it had a crazy lock on it simply because it was my father’s, but that other sentence sounded better. That and I’m always up for a challenge.)

Immediately upon inserting my tension rod, my worst fears were realized. The ancient lock turned…and turned. And turned. I inserted my raker. There were no tumblers. I repeat, none. But I persevered, for a while anyway. But 30 minutes, 2 frozen hands, and 1 scratched lock later, I was forced to relent. The lock had won. I assumed that it had a spring that the key had to hit in the back. I was right. Upon inserting the key, the tumblers jump into a reachable position, and the lock releases. Shame it took another week to get that satisfaction, however.

So how was your Valentine’s Day? 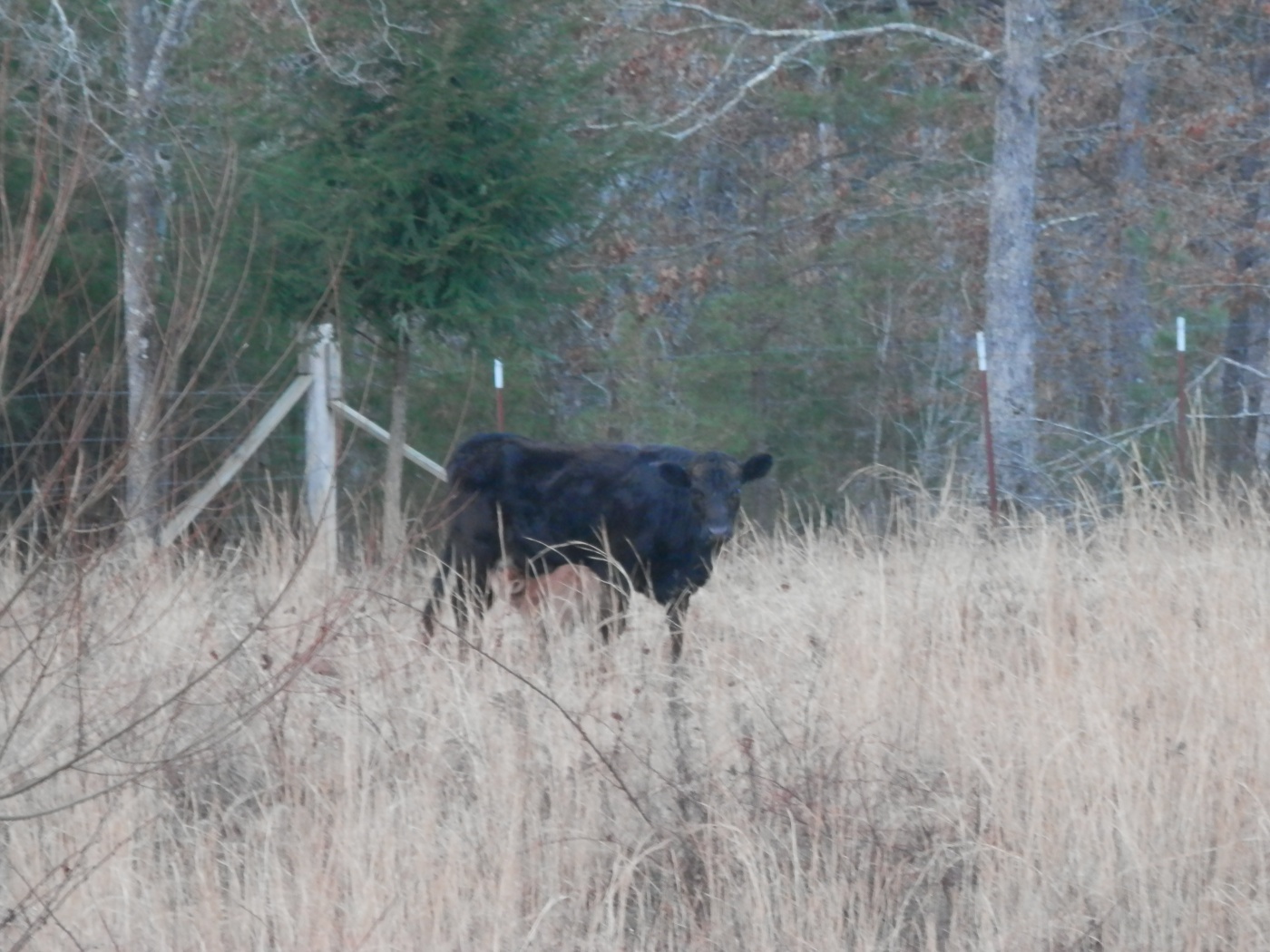 This morning I awoke to the cows making a frantic chorus of “moo’s”. I got Arlis up, and he went out to see what was wrong. Here’s the story:

A couple of days ago, yes, 2 days, we moved the cows from the lower field to the upper field. We count them and make sure they’re OK, etc. That was Friday. Today is Monday. One of our girls had a new baby calf and didn’t tell us. And what’s worse, she left it in the lower field.

Now, one might think why, let me tell you. This was her first calf. And even though we are the only home she’s known, she’s still a little skittish with letting us know about her baby. She hid it. As most mothers do, even our veteran girls. We had been outside and such, but not once had we heard the bawl of a baby calf. When the baby could no longer remain hidden, she cried out for momma. The rest of the herd went a little nuts, as is common with ours. We opened up cattle alley and let everyone back into the lower field to be with baby. (Arlis tried to catch baby, but she outran him-A good sign!!)

Everyone’s together now and baby is nursing well.

Here we are in the lower field. Spice and her new baby girl are waaaaay back there. 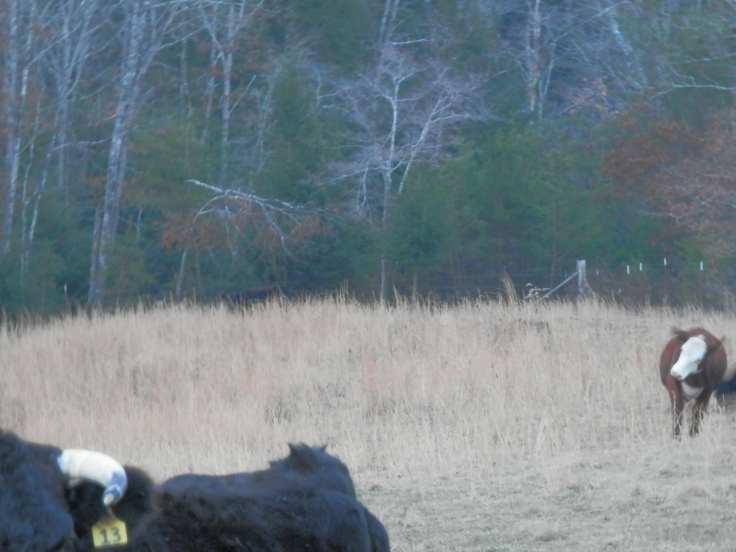 Now, imagine how well she had hidden her calf, if this is how hard it is to see Spice now. Trust me, she’s there. 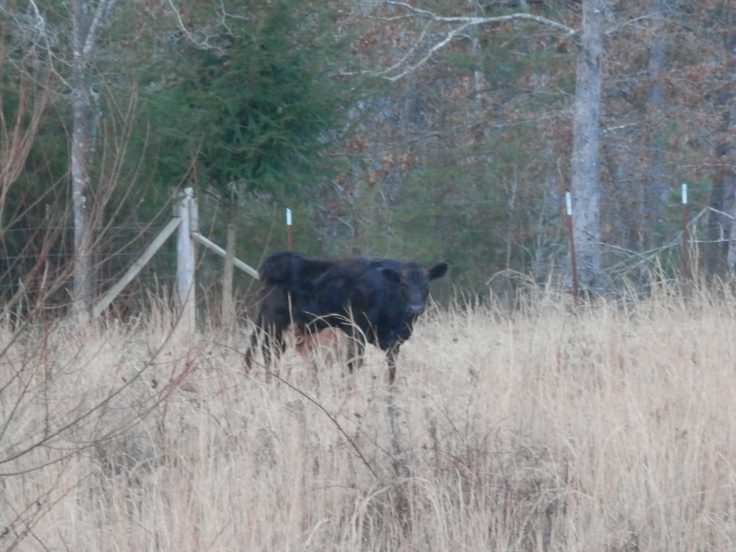 Here’s a video of her nursing.

She’s acting nervous because she is. All of the others have already gone up to the upper field, and she’s alone now. With us. When we saw how distressing it was to have us there, we left. We can get to know baby later!

Your book is on its way to the Post Office now.