Yup. We’re rednecks. And proud of it. Our redneckgenuity has saved us thousands of dollars and untold heartache and time. It’s allowed us to do things we would never be able to do otherwise. Anyone who can’t appreciate that, well, we just can’t be friends. (insert appropriate emoji here)

Anywho, we bought a hot tub. Looks a lot like this. 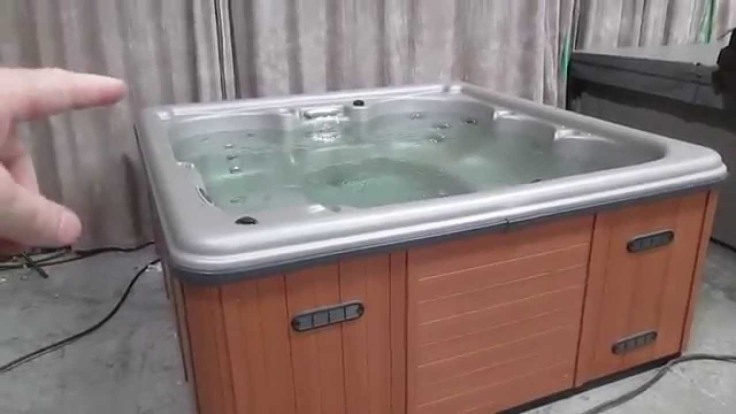 It was used, of course, and they lied to us, of course. The pump was completely rusted and froze up, and the cover for the control panel is still missing. But, the jets and lights all worked, and the pipes were fairly clean.

We spent two months getting it to work, then several days cleaning and disinfecting it. We built a little room around it (still building), and as you can see, it was amazing, awesome, and beautiful.

We’re sitting in it, the roof finally overhead, and my son (whom I pretty much bought it for) says, “This is just like a real hot tub. It feels like it. It smells like it.” Hot tubs were always his favorite thing at hotels and such. Now we don’t have to worry about finding hotels with them, something I always tried to do because he loved them so much. Nor do we have to worry about the nasty, cause honey, I done seen me some nasty in them hot tubs!

So, right after he says this, the pump starts turning itself off and on. Off and on. I reach over to turn it off. No go. Arlis screams, “Get out! Get out!” We’re all worried it’s gone off the deep end or possessed by aliens like in Maximum Overdrive, and we’re about to be electrocuted any second. He pulls the breaker and it shuts off.

We spent the rest of the evening troubleshooting.

Nope. No success. Turns out, that missing top of the control panel was essential for keeping the water out, and as a result of its absence, water got into it.

We took it out, put it in rice, etc. Once dried. We hooked it back up and voila! It’s working again.

Now comes the problem. My original suggestion of Ziplock and duct tape won’t work, they say, because duct tape isn’t water resistant enough. They don’t make that control panel anymore, and even if we were able to get a cover for it, the gel that blocked the moisture from getting into the wiring had to be torn out to get it dry. No, we needed a safe place to mount it, and its original spot was not it.

This first thing we did was fill up the hole. I found an old Tupperware dish I didn’t even know we had. Arlis cut the bottom out and ground down the edges, sanded it rough on one side and attached it over the hole of where the control panel originally sat with silicone caulking.

(I know the picture makes the water look gross, but it was dark.)

Then, we built a place for the control panel to safely rest yet be within reach should we want to use it. 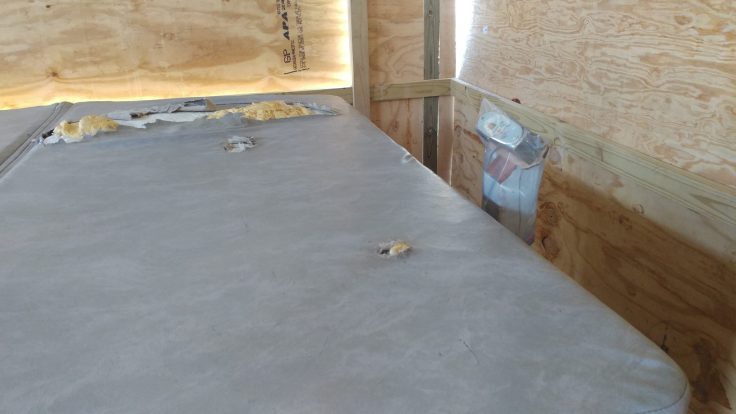 Why yes, the cover is in bad shape. It’s called filling the holes with Great Stuff until we can afford a new one. And yes, it works AMAZING at keeping that sucker warm! Also, the top parts of the walls will be screened in instead of boarded up. This room is a work in progress.

And finally, we needed a way to keep the control panel from getting wet again when our wet fingers reached up and touched the buttons.

And there you have it, folks. Redneckgenuity at its finest. It works great again, and all it took was a bag of rice, and old Tupperware dish, and one Ziplock bag.

I recently rewatched one of my favorite lines:

Seven of Nine is toasting at a baby shower and says, “May all of her desires come true except one, so she always has something to strive for.”

I have had many goals and dreams in my life, and I have pursued most if not all of them. I have been a complete homesteader, making or growing all of my own and my family’s food. I homeschooled my child. I have sang on a stage to people literally chanting my name. I even finally got that book written. OK, several books written. And I finally, after several years, got a picture book published, albeit independently.

I’ve failed at more than I’ve succeeded (We outgrew our land and were never able to make a business out of it), but I’m pretty sure that’s normal for everyone. If we all succeeded at everything, as Seven so elegantly put it, what would we have to strive for?

I still have a goal, of course. I’m sure it’s more than obvious. I wish to be traditionally published. Will it ever come true? My doubt is growing, but that’s OK. See, I have something to strive for. We all need dreams. We all need something to look forward to.

A coworker friend of mine cruises a lot. At least once a year, sometimes several, and he told me that without the next cruise to look forward to, he gets horribly depressed. As any longtime reader of this blog knows, I have anxiety, but ever since I started writing, that anxiety has become manageable. Oh don’t get me wrong! The veins in my arms are presently burning with the desire to get something done. That will, unfortunately, never go away. But I can function far better now because of my writing, because I have something to strive for. If that desire is taken away, I become lost. It isn’t pretty. Does this mean that once I get my dream of becoming published I will no longer know what to do? Absolutely not! There are awards to yearn for, accomplishments to be had. I do not believe I could, or will, ever reach the top.

This blog post made an impression on me. Although it’s mainly about people who have peaked and therefore need a new life direction, it can be beneficial to us all, I believe. I’ve often pitied those who have reached the top, especially at a young age. All the athletes and gymnasts, now what do they do? It’s a shame really. We all envy them then, but in reality, their lives are but a tiny flash of joy sandwiched between the desire to reach that joy and the depression which follows.

So maybe I’m better off never reaching this goal. Maybe this is my one desire I will have to strive for. And I’m starting to be OK with that.

POC on a book cover

POC is a broad term including pretty much everyone that isn’t stereotypically white, and since a great deal of the world bunches all us “white people” together into one very stuffy, very stale bowl, it obviously doesn’t include everyone. But I recently watched a presentation by Barry Goldblatt, literary agent for Barry Goldblatt Literary, that spoke to me. He said there is still a firm belief within the publishing world that placing a POC on the cover of a book will keep it from selling, at least as well.

I don’t doubt that. But not for why you think.

As a child, when I saw a POC on a cover of a book, I groaned and moaned because I knew the book was going to be one of those serious “teach kids a lesson” books that would bore me to tears. It was usually a girl with some detrimental look on her face who had lived some terrible life of slavery and concentration camps and while very interesting and educational (probably more interesting to me now as an adult 😉 ) they were not fun. In fact, they were often depressing.

Fast forward to today. We pretty much have the same thing, only now the POC’s are Arabic and Indian.

I’ve seen a very very few books with POC on the front that looked fun. Of Giants and Ice is one (although they left the POC off two of the four covers, never figured that out), Princess Cupcake is another. This blog post shares 12 books with POC where the topic isn’t racial. Little Red and the Very Hungry Lion looks cute.

I did an internet search and an Amazon search. Both came up with pretty much nothing but serious books that completely turned me off from the get-go. I had to really search to find a book with a POC on the front that was just for fun, like the ones I mentioned above. And I truly think that’s the problem. I think that’s the reason “POC covers don’t sell”. If the publishing community would quit treating POC like some sorrowful event we all have to read with our heads bowed, they would sell more. But that’s just my opinion.