We’ve started preparing for spring already.  I ordered seeds yesterday.  Now, what troubles me is, the sweet corn seed that I saved from last year has little worms in it.  Those little worms have grown into flying gizmos that suffocate and die in the bag.  So, they must have been present when they were saved.  Arlis said to order sweet corn seeds just in case.

A normal 6-7 inch carrot (amsterdam minicor carrot)-we did this because of all the trouble we had last year with carrots.  Turns out, the carrots were only supposed to be 1″ globes, so they weren’t trouble, just tiny.

The homestead 24 tomato as it is said to do well for canning, has determinate vines, and does well with hot, humid weather.  They are normal red, but flattened tomatoes.

Red creole onion-not a red onion fan, but this was one of the few good for storage onions

Early frosty pea-thought I would try a more traditional pea this year and see what the differences are.

Golden bantam corn-we’ve enjoyed the white corn all these years, but I wanted to try yellow this year

Good we did this as they’re BO’d 21 days currently and sold out of many last year.  I have watermelon seeds from last year, even posted some for sale, no takers yet.  Supposedly Arlis’s mother still saves the seeds from the ones I gave her years ago and they still work great.  This year we have the machinery already, so we can get things in the ground on time.  I hope and pray it will be easier, or at least better, this year.  The garden is the only thing we made money on last year, unless you count the startup costs of the tractor/plow/etc.

I have taken up basketry, and am apparently pretty good at it.  Knitting I enjoy, and can make for gifts, myself, and family, but I don’t see it being productive.  It costs too much, takes too much time, and I’m not the best out there for sure!

Here is my favorite basket.  I made it specifically for myself.  And yes, I did all the dyeing, cutting, etc-completely from scratch

I believe I have advanced past the patterns/instructions I have now and have ordered a new book.  It’s circulating the mail system and will arrive later this century.

Arlis finished the underpinning.  It’s nothing to write about, but at least it’s done now.

The chickens are most displeased, and the marans spent all day trying to find a way in.  They were mad and informed us quite so.  We also put plastic up on the ceiling as the dry wall still isn’t up.  It’s not pretty, but the dry wall will cover it and it helps keep us warmer.  Our stove is for 1200 square feet.  We calculated our house to be around 1400.  So, we put Marcus’s bed in the hall (he loves it) and shut off his room and keep the living room curtain closed on really cold days.  Like today.  It’s SEVEN DEGREES!!!  OK, I’ve noticed some people from Russia viewing this blog-begin laughing at us now.  Oh, and that’s Fahrenheit, I’d have to calculate Celsius.  32 degrees F is 0 Celsius if that gives you an idea.

Those two chicks from a while back have really grown!

I still think the gray may be a boy.  The newest chicks race to get out (we didn’t let them out today) and explore.  They drink a lot, and I’ve noticed their crops are big.  I was worried and discovered that it is completely normal for chick’s crops to be huge, as long as they are soft.  All but one are.  We’re watching that one. 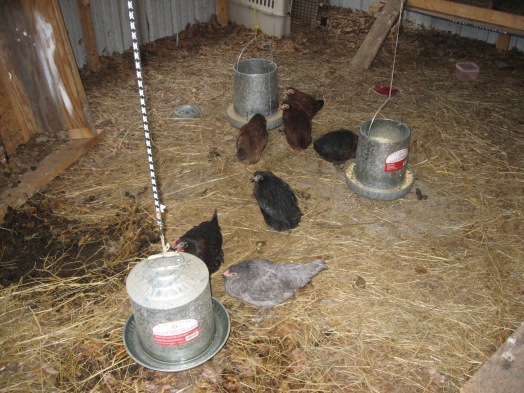 The coop looks worse than it is.  We’ve taken one of the waterers, and leave it in the house.  It thaws.  Every morning and night we switch them out.  We were pouring hot water to melt them, but this is easier/better I think.

Did you know chickens will leave footprints that you’ll take a pic of to go look up to see what type of exotic bird just landed on your back porch?  Yup-I’m an idiot.

We break the ice for the cows.  They RUN if they think we’re about to give them some grain.  We let them have free reign of the upper and lower fields.  The barn with all the hay is in the upper field.  The lower field has already saved us at least one bale of hay, we believe.  Also, they don’t seem that interested in it.  Of course the Dexters are mountain cows with a REALLY THICK winter coat who could care less about the weather really.  There were a couple of weeks they weren’t happy, but they’re fine now. (As I write this, they all traversed to the barn and started chowing on hay-of course) 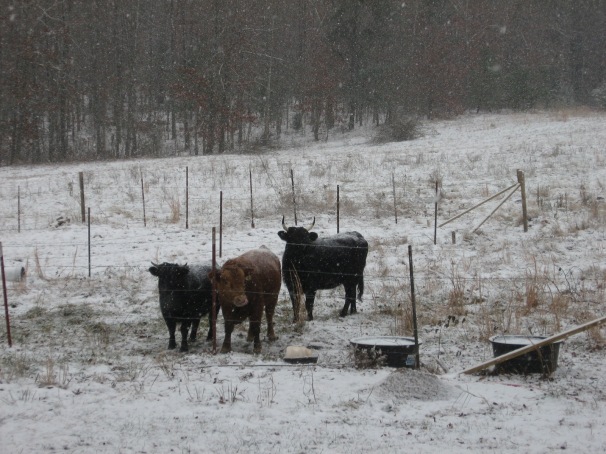 We’ve also weeded and manured the strawberries.  They say to mulch them 6 inches.  I put some hay on part of them, we’ll see what happens.

The rain here is something awful and is definitely going to effect our garden.  It washed some of the turned dirt into the driveway, and has me concerned about where to plant it all next year.

The above gives you an idea.

I made jam and fruit roll-ups from the strawberries.  mmmmmmm

Arlis got to kill this.  There was much wailing and gnashing of teeth (seriously a lot of words and WHAM’s!!)

I got to stand on the chair in the kitchen when I heard, “Where’d it go?”  (you can see it’s eyes GLOWING-AAAAAAHHHH) 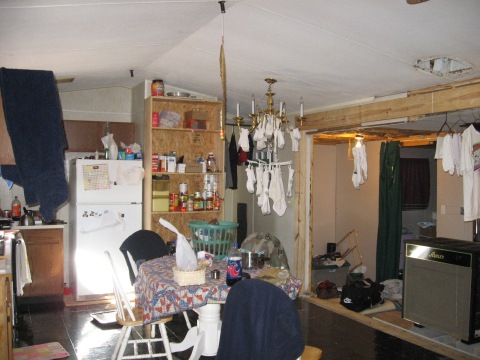 And last but not least-laundry!  This is less than half of it.  It dried rather quickly.  We would take the dry from over the stove and rotate.  The showers and other places were full as well.  I have since learned how to dry outside in the winter.  If it moves, it’s dry.  If it’s frozen, it’s still wet.  Speaking of which, the wind blew some off and froze it to the ground.  It had the privilege of the dryer.  I have some out there now I better go bring in.