There was a lady who was moving and had one wether left (a castrated ram) for $60.  That’s CHEAP!  He’s less than a year and good and fat.  Marcus named him Shaun:

He’s so cute, and he hops when he runs.  I tried to get it on film and couldn’t…failure #6…He’s a haired variety.  The wooled variety are $200-$400 each!!  Haired variety have wool, just not as much, and selective breeding has given us woolen varieties.  Sheep started out like Shaun here.

Baby has been scratching her winter coat off.

My haystack has grown mushrooms

OH!  Our wired housephone died, so we bought the cheapest one at the store-a white slim-line telephone with automatic redial-ha ha ha (we watch Keeping Up Appearances)

Update on the garden:

Beets, cabbage, onion from seed aren’t anything to see really

Poor Fargo and Beefsteak are not happy.  We’ve been keeping them separated from the mother’s to be

And last but not least, we’ve been training Baby some

Lots and Lots of Failures

Well, we gave up on getting calves.  Oh they’re pregnant.  Booger looks like a barrel on lego blocks.  It’s quite amusing, and I wish I had a good picture for you, but every time I go to get a specific picture, I never can, and it’s too cold to try to today.  The really cool part is Booger’s calf kicked Arlis last night.  He was hugging her (I’ll never really know why), and it kicked!  So that’s nice.

It’s snowing in the picture, that’s from this morning.  The snow is now quite large and fluffy.  And starting to lay on the automobiles, etc….   ….

ANYWAY…we have had a ridiculous amount of junk.  I inherit my grandmother’s house.  It was used as a walk-in closet for my mother and aunt.  My mom dies shortly after and never goes through it all.  We move here and take it all with us b/c it has to go somewhere.  We have been going through it ever since.  Here is my kitchen during some of the peak stages.

And here is the shelf in the shed of all the stuff to get rid of.  Notice the “Get Rid of” on the sides.

We also got rid of a washer and a dryer, a mitre saw, and I honestly don’t know what else.  Here we are at the flea market trying to get rid of it all.  I had one table with priced items (it’s the one you see) and the other tables with “stuff-a-bag for $5) items.  I figured it would vanish for that…it didn’t.  I’ll wait until summer and try again.

So, that’s failures 1 and 2, now for #3. For those not in the know, I make soap from scratch.  Well, a wood stove this time allowed for me to make lye from wood ash.  Here is attempt #1

Which actually worked better than attempt #2 where I drilled holes in the bottom of one end of the plastic tub, filled it with ash, and let it drip in the bucket.

The wood is for wind protection.  The kennel is for leveling.  I got nothing.  I’m going to try again with fresh ashes and lots and lots of water.  This started b/c of failure #4.  I used a washboard in the tub to wash some clothes, and thought it was so wonderful, I started washing laundry that way.  It took forever, was very tiring, and (thankfully) actually turned out not as good as I thought.  The machine was actually getting them cleaner.  But at least I have an alternative if I need it, and I know my soap works well on clothes, not just people, and I can get out spots this way.

Now, on to failure #5.  We were starting to get worried, b/c the weather was getting too nice too quick, so we made sure we got all our cold stuff in the ground.  You know, beets, onions, potatoes…  Well, here’s 50 pounds of kennebec, and 50 pounds of red pontiac in19 rows for you.  All in one day!  We used the potato plow to make valleys, and planted in the rows.  That made it quicker.  However, my finger is permanently stained from all the cutting…sigh

Beautiful isn’t it?  We knew it was going to rain, just not torrentially…AGAIN…

See the potatoes floating out of the garden below???  We’ll fix them like we did our peas I guess.  As soon as it STOPS RAINING OR SNOWING OR HAILING OR SLEETING OR ICING OR……

Please visit my next posts for updates of a positive note…

Planting and Warming Up

I HATE doing the dishes.  But once I’m started, I can’t stop.  I think I’m manic depressive.  The same way with cleaning the bathroom, weeding, planting, you name it.  I bought leeks today, and will plant them tomorrow I hope, along with the onion seeds, onion bulbs, beet, carrot, and cabbage seeds.  Arlis just came in from tilling for me.  IT WAS 70 DEGREES TODAY-YES YES YES!!  I still have my bedroom window open, and actually got warm today in the truck!  Now, that being said.  Butty is doing great, but Arlis’s little one died.  He refused to take a bottle and was just too young to wean himself.  He drank a sip or two from a bucket.  We wound up tube feeding him the milk.  He had enough strength to fight us, so we thought we were OK.  He was dead the next morning.  Arlis was real upset.

On to the good news…

I have bought transplants and planted romaine, buttercrunch, and red lettuce.  We ate some of the leaves that fell off, and they had real flavor! 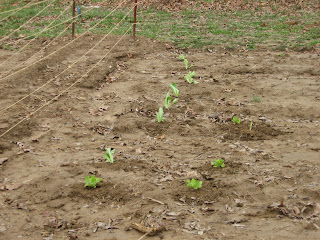 They look better now, much more healthy.  I got to use my compost for the first time and it’s made them real nice!

You can’t tell, but I have a lot of pea sprouts.  That means they made it!!  It was a lot of work, but here’s praying they do well!!

I feel far more confident than last year in what I am doing.  I actually feel like I know what I’m doing…a little sometimes anyway.

I also bought rosemary and oregano.  Last year’s oregano and rosemary were transplanted at the end of the season.  They didn’t like that.  So they have permanent homes in the flower bed by the house now.  I learned that oregano can survive the winters here-YES YES YES!!  It costs the same as one bottle of herbs for one plant. If I don’t have to buy every year-it will REALLY be worth it! 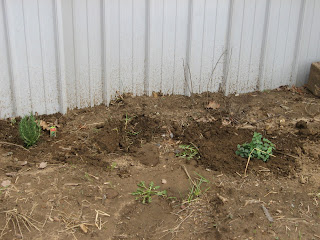 They have been mulched and weeded today and look much better.  My tulips, hyacinth, and something else from last year are blooming next to them. We got to use the mulch we made ourselves from scrap!  A friend visited here yesterday.  She wants a farm really bad.  I hope she gets to do it!

Last note-Booger lost her cervical plug two days ago (a bunch of goo came out back there).  That means she should calve in two weeks!!  We really hope and pray it goes well!  They are supposed to take no more than 4 hours their first time, and usually about a half hour after that….OK ladies, altogether now-THANKS A LOT EVE!!!

I will post pics of the calf the SECOND she has it!

Marcus found a calf!  Of course, it was the sickliest one there.  They had one a month old, but noooo, he had to have the week old skin and bone.  We’ve had him a week today.  Arlis had to have one, it’s a hereford.  They’re brown (called red-I never understood that, looked brown to me) with a white face.  Marcus’s is a holstein.  Arlis’s is about a month old and cost more, of course.  He’s weaned and refuses to take a bottle.  He eats grain and grazes on spring shoots.  Marcus’s, Butty, got pneumonia.  We prayed and prayed and made him walk and gave him shots.  We went ahead and gave the other one shots as he was coughing too.  Gave him gatorade/water mix in between feedings.  Wish it only cost me $12.80 for 6 shots of penicillin and 2 other meds and I was cured of pneumonia in 3 days.  He’s up jumping around now, and eating at the corners of our clothes. 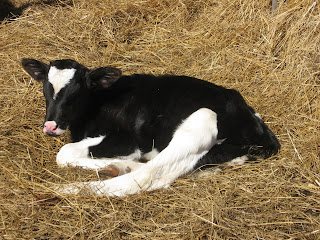 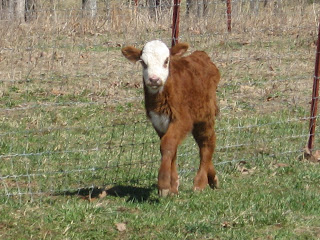 Starks delivered plants!  They come in this cardboard box. 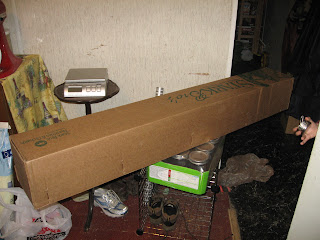 Here is my olive tree 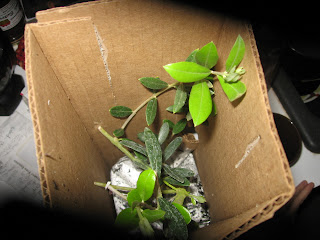 And here are Arlis’s trees.  They are shipped bare root, which means no dirt and dormant.  He planted them immediately.  They’re the two sticks 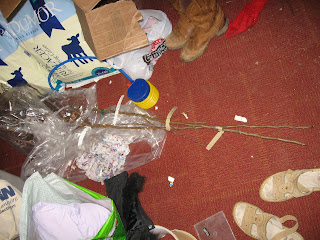 I planted mine too.  It was more fun 🙂  I got to put the orange tree in its larger, and possibly permanent, home.  And, Marcus’s plant, impatiens, that he got me in Kindergarten for mother’s day (2 years ago) got moved to a bigger pot too.  I’m think of trying some cuttings from it.  I put them all out a few hours here and there to harden off for the summer sun. 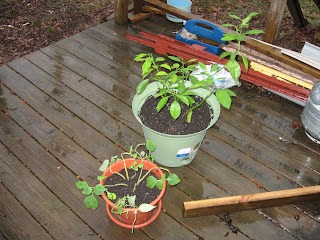 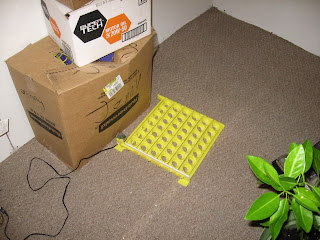 And turn the ones not ready by hand three times a day.  Turning them near the end can cause suffocation as the air sac moves due to gravity, buoyancy, whatever it’s called, and not turning them until then can cause the membrane to stick to the shell or something and they can die that way.  Yes, the hen does this all on her own naturally. 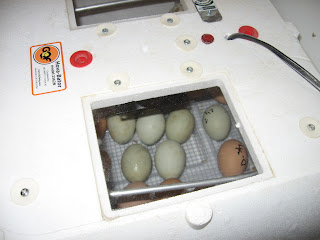 Only one hatched out of 13, so we took them outside and cracked them in the drain bucket (for when we butcher chickens) to see what the problem was.  One was a fully developed chick, all the others were nothing to beginning stages.  The full chick was churping and jumped out of my hand when I picked the egg up to check on it while still in the incubator, so we don’t know what killed it.  It only fell one inch onto the wire frame which is bouncy when it did jump.  I don’t know if that did it, or the one chick that did hatch did it when it moved all the eggs around and that killed it.  But, they did not go to waste…ahh the circle of life 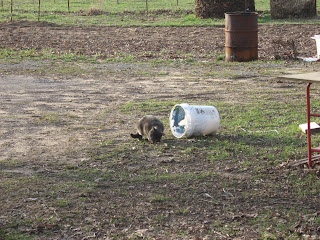 It rained again.  My peas originally did OK, and then… 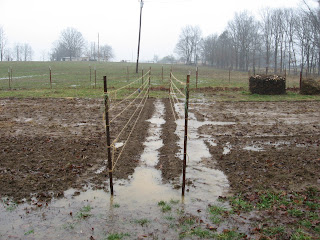 And it rained some more 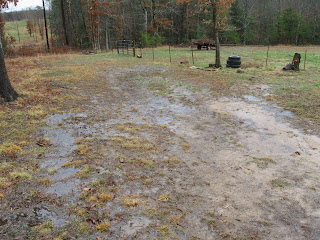 The first time we had gusts up to 70mph and spent one hour in the middle of the night in Marcus’s bathroom praying while I missed my basement and demanded a root cellar. 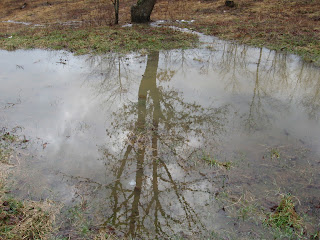 It just would not stop raining.  This was the time Knoxville flooded.  That was our run off.  I would say I’m sorry, but my peas are probably growing in someone’s yard in Knoxville now.  We have a stream that runs all the way from the fence on the end of our property to the creek in the woods of dad’s. 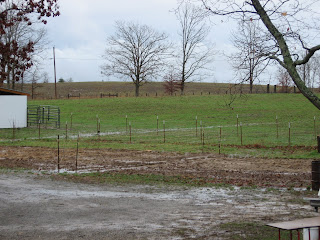 Arlis is a junk food junkie and our Walmart has a clearance bakery cart.  He bought cupcakes and a single serving blueberry pie.

“Yeah, but that doesn’t mean…Fine!”

“Did you read the ingredients on the blueberry pie?” (we eat according to Torah Law)

“Sugar…at this point I can’t spell them b/c I can’t possibly remember how he pronounced them…LOCUST!”

(I started reading it now)  “Molitol.  Diabetics should consult a physician as this is a sugar alcohol and is metabolized more slowly than sugar…”  I read silently and then laughed hysterically…It said molitol in large quantities can act as a laxative.

We all ate a bite with no known aftereffects..but it is a running joke now if someone is too long in the bathroom we ask, “Do you need a blueberry pie?”